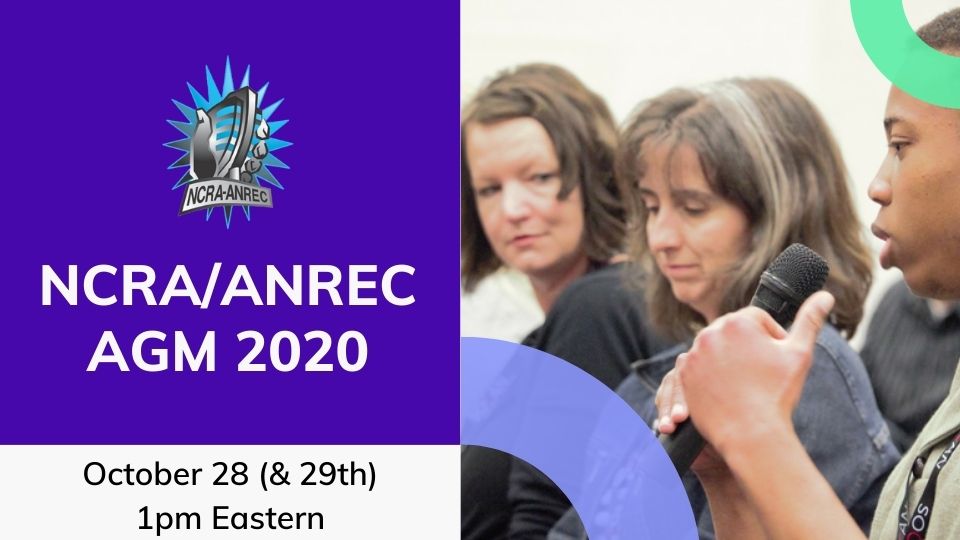 We wanted to inform you about two important things: The dates of the NCRA/ANREC’s 2020 AGM and a board byelection

Because we couldn’t hold the NCRA/ANREC’s AGM in June (due to the pandemic), we have rescheduled it.

Please add these dates to your station calendars.

We will send out an agenda, reports, financials, and other meeting materials before the meeting.

The majority of NCRA/ANREC board members have agreed to stay on the board until a new board is elected at the AGM, but we are holding a byelection to fill three vacant seats.

Board members elected in this by-election will serve until the second Annual General Meeting following their election (AGM 2021).

Participation in the by-election as a candidate:

Candidates must complete the attached generic nomination form and return it to the acting NCRA board secretary by 5pm PT, Sept 10, 2020.

On Sept 11, nomination forms will be redistributed by email to all NCRA member stations, along with voting details. Members will have seven days to submit their vote and the elected representative will be announced on Sept 18th.

Candidates must be nominated by their station (specifically the staff or board member who is the station’s NCRA/ANREC contact).

Diverse representation on the board

The recently-released report They Don’t Come To Us discusses some of the work that the NCRA/ANREC needs to do to tackle its own racism. The board is actively discussing this work. Please see the attached files for a summary and the report’s recommendations.

We can’t emphasise enough that, in order to do this work, the board itself needs to hold diverse representation of our sector.
Therefore, we strongly encourage applications from women, racialized people, Indigenous people, people with disabilities, and others who reflect the diversity of the communities we serve across Canada.

We also ask that station staff and board members share this call for board members widely with your station volunteers and consider diverse representation of the c/c sector in the nominations that you submit.

No station can have more than one representative on the NCRA/ANREC board, with the exception of the Indigenous seat. There is currently representation from:

The NCRA/ANREC’s bylaws require that the board represents at least four of the six regions of Canada. These are: the Pacific (British Columbia); the North (Northwest and Yukon Territories, and Nunavut); the Prairies (Alberta, Manitoba and Saskatchewan); Ontario; Quebec; and the Atlantic (New Brunswick, Newfoundland, Nova Scotia, and Prince Edward Island).

The board currently represents four regions, (Pacific, Prairies, Ontario, and Atlantic), so this requirement is fulfilled. We encourage nominations from any part of Canada and any member station that is not yet represented on the board.

Please contact: secretary@ncra.ca to submit a nomination form or to ask questions.

Voting procedures will be sent out to members after the candidates are announced.