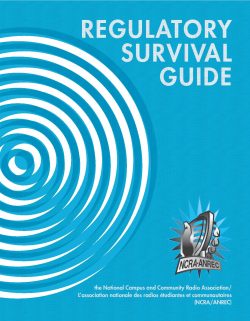 Using the public airwaves is a privilege. As a result, the Canadian Radio-television and Telecommunications Commission (CRTC) requires each campus and community (c/c) radio station to follow certain regulations and conditions of licence in their broadcasting.

For more information about the CRTC and a list of all policies related to c/c radio see the link on the right, or check out the “White Pages c/c Directory ” link on the left

To help communities amplify their voices, the NCRA helps campus and community radio stations get on-air and, once broadcasting, to stay compliant with all relevant requirements.

To read some of the letters the NCRA has submitted to the CRTC over the years on behalf of individual stations and the sector as a whole, go here.

We have also produced these resources:

We are very happy to announce the completion and release of the new “Regulatory Guide 2.0” [Updated to 2.1 Sept 23 2015], which is a very large update on the 2011-2012 guide our members so appreciate.  The guide is at least twice the size and provides much more detail.

We will not be printing copies, which saves a bit of money but also allows us to update.  So please note that as things change, we will update and release the guide (ie 2.1, etc).

The entire guide is available in French.

***Please do not share the guide with general membership or other member, but you are welcome to share within your station ***

Both editions were edited by NCRA Executive Director Shelley Robinson, Barry Rooke and Regulatory Affairs Director Freya Zaltz, as well as other members of the External Policy committee and CRTC staff.

Check out the Webinar of Freya and Shelley explaining what’s new with the 2015 edition here!

For older/other resources see below:

This bilingual guide was produced in the summer of 2011 by David Meffe, the Regulatory Support Coordinator. His position was funded by the Department of Canadian Heritage’s Young Canada Works program.

It covers the basics of the Campus and Community Radio Policy (Broadcasting Regulatory Policy CRTC 2010-499) in plain language, for use by station staff and their volunteers. Feel free to print, distribute, and adapt for non-profit use, with acknowledgement. (Don’t be fooled by the 2011-2012 on the cover, it continues to apply so long as long as the CRTC 2010-499 Policy does.)

This bilingual guide was produced in the Spring of 2012 by Zoe Creighton of Kootenay Co-op Radio CJLY-FM in Nelson, BC, as part of that station’s joint project with the NCRA called “Sounds Cooperative“. Funded by the Cooperative Development Initiative, a program of the Government of Canada, it aimed to explore and build on the existing connections between co-operatives and campus and community radio stations.

The project saw the creation of a handbook, with the second chapter detailing the steps involved in starting a campus or community radio station and applying for a licence.