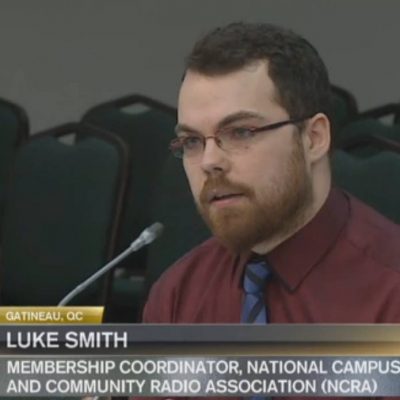 Luke Smith moved from the UK to Canada in 2006 and has been in Ottawa since 2009. In that time he has held a number of roles in the community. Most recently Luke co-founded and is now the Chair of the Ottawa Men’s Refuge. He has also volunteered with Jer’s Vision, the Carleton Gender and Sexuality Resource Centre and was the Vice Chair and Director of Communications at Capital Pride.

Luke’s work has included being the Director of Digital Communications for the student union at Carleton and in 2012 he began working with the Ottawa Police Service as the GLBT Liaison Committee Coordinator. In that role he updated recruit training, and the Liaison Committee’s outreach.

Luke’s main volunteer work has been in the media; he has been the manager editor and a producer of the award winning show ‘Let’s Talk CanQueer‘ which was previously called ‘The Velvet Studio’ and has covered a wide range of GLBT issues. In 2015 Rogers 22 aired the show ‘Let’s Talk CanQueer’ a 5 part series created and hosted by Luke that covers topics such as HIV criminalization and gender independent youth. He currently works at the National Campus and Community Radio Association as a Membership Training Coordinator.